Select the Lookups section to interact with the lookup lists configured in Incident Xpress. Lookup lists are used to offer pre-configured text selections from which users enter information into an incident.

NOTE: When you sign up for Incident Xpress, you will be asked to select a vertical version. Each vertical version comes with a default set of Lookup values that are common for this vertical. These values can be edited, deleted or new ones added any time prior to a subscriber deploying the product in their organization. After deploying the product, if Lookup list descriptors are used in an incident, they cannot be deleted, just edited or deactivated. It is best to build your lookup lists carefully before Incident Xpress is deployed for general use.
There are two types of lookup lists, those with singular items and those with items that have a hierarchical relationship. The two lookup lists that have hierarchical parent/child structure are INCIDENT CLASS and LOCATION.

Figure: ADMINISTRATION screen – Lookups – Location lookup type
The labels for these two lists can be edited by selecting the [LABEL SETTINGS] button. This will bring up a dialog box with the existing label names which can be edited.

Figure: ADMINISTRATION screen – Lookups – Location Update Labels
Every option and sub-option can contain one or more items to select from. INCIDENT CLASS allows up to four (4) level descriptors and LOCATION allows up to five (5).
To see an example, select the INCIDENT CLASS option in the "Lookup type" dropdown list. The CLASS options are separated into major areas of classification such as Accident, Environment, Security, etc. Each of these has child-options and each child can have other child options. A green arrow beside a descriptor indicates that it has a child option.

NOTE: Select the INCIDENT CLASS type, then select the Excel icon next to the [LABEL SETTINGS] button to export the lookup list settings to an excel file. This will allow you to view all the default Class, Category, Sub-Category and Types in an easy to understand way.

Figure: ADMINISTRATION screen – Lookups – Location Lookup type
2. On the right side of the list, select the top [+] icon to add a child lookup to the LOCATION list. 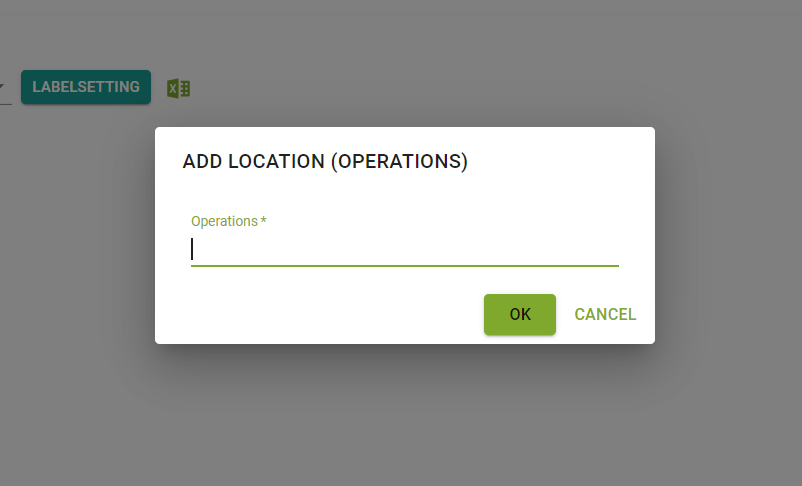 NOTE: A child lookup cannot be deleted if it has been used in an incident record saved in the system. An attempt to delete will produce an error message directing you to deactivate it instead, and it will appear as crossed out.